She told us last week that she would be providing the donuts for the Annual Fourth of July Prayer Breakfast, but wouldn't be able to attend because she had to keep her shop open. The donuts and coffee were served before the featured  speaker told an amazing bit of local history about the Women Airforce Service Pilots (WASPS) training days in Sweetwater, Texas. My eighty-five year old cousin told me later that he remembers standing out in the cotton field waving to the planes of women pilots.

The story and music and flags and veterans recognition moved me to hopeful and proud tears. 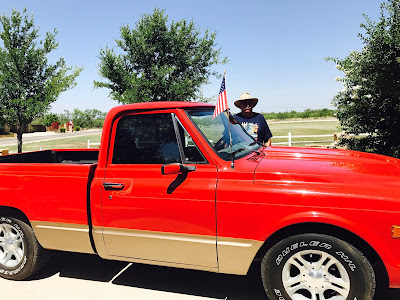 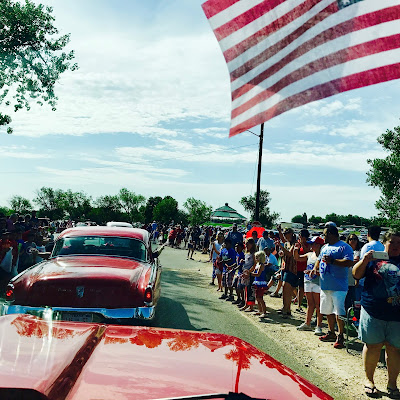 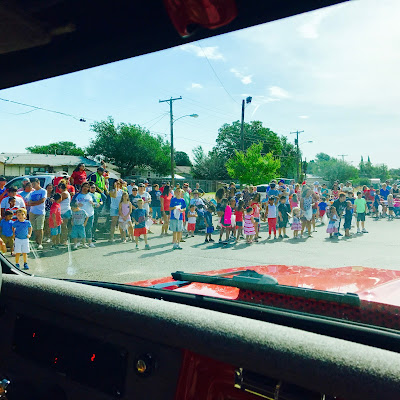 After driving our '69 Chevy Pickup in the parade, we made our way back around to her Donut Shop, where there was the usual long line in the drive-in window. We had a nice visit over donuts and coffee  with friends. We talked about our old cars and family and old cars.

All the while she was hovering over us with us with  "honeys" and "sugars" and  free donut holes. She says she gives them to her friends, but I suspect that we are all in her special friendship circle.

When she stopped again at our table, I asked her to tell me her story. She said it was long and complicated, but she gave me her shortened version.

She had been born in the Kingdom of Cambodia to her Vietnamese mother and Chinese father. Her father spoke Chinese, Cambodian, Vietnamese, Thai, Indonesian, French, and English. He was the King's interpreter. He and the King were very close, and she attended school in the palace. When the Communist came in and started a program to redistribute the wealth, her father sent her mother back to war torn Vietnam. He asked an American military doctor to adopt his daughter and take her to America. She was four years old. Her father was killed. Her adoptive parents eventually moved three of her siblings and her mother to the United States.

She brought us more donut holes and refused to charge us for anything. Of course hubby laid money on the counter anyway.

As we walked out the door, she finished her story with,

"That is why I tell everyone that
I love America." 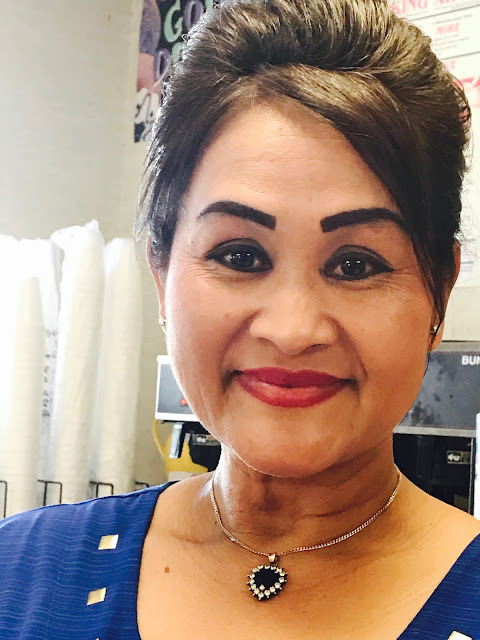 Renee
I am a wife, mother, grandmother and daughter of the Most High God. This blog was born out of a need to keep my family and friends updated when I started following my husband and his job. The stories here are an extension of my journal as well as my Bible studies. These days, the jobs have ended and we are back on the farm. I hope what you read here encourages, blesses, and entertains you as you pass through the journeys of your life.

When the Israelites were about to leave the wilderness and cross into the land promised to them, Joshua instructed them to follow the Ark of the Covenant (God's Presence) because, "you have not passed this way before". Joshua 3:4